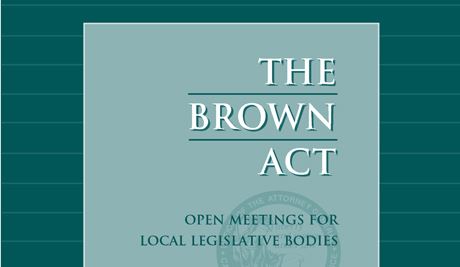 
The Brown Act or "Open Meeting Law" is officially known as the Ralph M. Brown Act and is found in the California Government Code § 54950 et seq. 1. The Brown Act was enacted in 1953 to guarantee the public's right to attend and participate in meetings of local legislative bodies, and as a response to growing concerns about local government officials' practice of holding secret meetings that were not in compliance with advance public notice requirements. The Brown Act is pivotal in making public officials accountable for their actions and in allowing the public to participate in the decision making process.


Who is Governed by The Brown Act?

The Brown Act governs local agencies, legislative bodies of local government agencies created by state or federal law and any standing committee of a covered board or legislative body, and governing bodies of non-profit corporations formed by a public agency. Examples of these would be city council, county board of supervisors, special district, school boards, standing committees, and even some types of Home Owners Associations (if they were created by a public entity and constituted as some sort of public district.)

A meeting, as defined by the Brown Act, is "any congregation of a majority of the members of a legislative body at the same time and place to hear, discuss or deliberate upon any item that is within the subject matter jurisdiction of the legislative body" (§ 54952.2 (a)). For instance, when the quorum for the District's Board of Directors reaches the number necessary to be a majority (i.e. 3 out of 5), that is considered a meeting under the Brown Act. Also, when the same or a greater number of directors are attending a social gathering, for which no meeting notice was given, and they start discussing business under the jurisdiction of their legislative body, that would be considered a meeting that falls under Brown Act regulations

The key elements for a meeting are quorum and discussion, hearing or deliberation of issues; the meeting needs not to be formally convened in order to be subject to the act. That means that "informal", "study," "discussion," "informational," "fact-finding," or "pre-council" gatherings of a quorum of the members of a board are within the scope of the Act as meetings.

Exceptions (Meetings Not Covered by The Brown Act)
Conferences and retreats, other public meetings, meetings of other legislative bodies, social or ceremonial events are exempt from the Brown Act provided that legislative members follow certain rules such as limiting the discussion to the agenda in the conference; or that legislative members do not discuss amongst themselves business of their legislative body. Regulations for these exceptions to meetings are contained in § 54952.2(c). Also excluded from the application of the Brown Act are individual contacts or conversations between a member of a legislative body and any other person (§ 54952.2(c) (1). Any other person is defined as a non-staff or non-board member.

For more information you can read Open & Public V: A Guide to the Ralph M. Brown Act from the League of California Cities.